The following is a firsthand account of the Women’s March in Richmond, VA, on Saturday, January 20th by opinions editor Anna Mitchell. Her column represents her perspective on the events of the day.

Approximately one year ago President Donald J. Trump was elected to office. This was a joyous day for many people. But for me, it was a sad and angry one. It was a day that would, to me, live in infamy. As a devout feminist, I was horrified to see a man who represented every ideal I resented so become leader of my nation.

I wasn’t the only angry one. Thousands of feminists nationwide- and worldwide- agreed with me. We would not let this man turn the public world into a hateful, spiteful place. He was a racist man, an arrogant one, and a stubborn misogynist.

And so the Women’s March was born. Born to combat Trump and his misogynistic remarks, it soon became a protest against him and every one of his nasty ideals. It was a march of feminists, by feminists, fighting for each and every soul who needed it.

The march was huge. The walk in Washington, D.C. was the biggest, but marches were held nationwide, and even worldwide. It wasn’t only Americans who despised Trump and all he represented.

Last year, I could not fight with them. Disappointed but determined to come the following year, I swore to myself that one day, I would stand alongside my feminist heroes and fight for what was right.

On the morning of January 20th, 2018, I woke up tired but excited. I donned my pink shirt and hurriedly put my handmade poster in the trunk of my mom’s car. I had spent hours working on it the night prior. I was excited to show off my handiwork- a two-sided poster that read “Girls just wanna have fun-damental rights” on one side and “You grow, girl!” on the other. My mother, sister, and best friend joined me in the car and we headed to Carytown, Richmond.

An hour later we arrived in Carytown. We arrived an hour before the march, so that I would have time to pick up a piece of feminist garb I’d ordered from a local Richmonder. I received my bright pink hat and we headed to the march.

We arrived at our destination to see a sea of pink clothing and brightly colored posters. We were still an hour early, but already a hundred people were gathered there in the mostly-empty parking lot of an old Kroger’s. The lot filled up quickly over the course of the next hour.

There was something beautiful about being surrounded by so many feminists. In rural Prince George County, the majority of people are republicans. You might find the occasional feminist hidden in the shadows. I was lucky to find a few friends who thought like me, but rarely did I get a chance to discuss politics besides with my own parents. There was always a whirlwind of opinions and thoughts trapped in my head, but they had nowhere to go but in circles.

Until that early, chilly January morning.

I looked around me in awe, admiring every poster I saw. “Speak truth to power,” read one. Another poster said simply, “Love prevails.” It was amazing. I, being emotional as always, wanted to cry. But these feelings were not sad ones. I only felt joy.

Finally, I had found my fellow feminists. Strangers became friends, talking and laughing with one another. We listened to each other and learned about our lives, our struggles, our desires. Everyone took photos of each other’s signs, bonding over similar catchphrases or meaningful slogans. Two little girls with their own signs even took a photo with me and mine, to my delight.

Soon enough I was surrounded by hundreds of protestors toting posters. They were all different in their own ways. There were men, women, and non-binary individuals. There were families ranging from the tiniest toddler to the frailest old woman. There were people of Asian descent, African descent, Hispanic descent, Indian descent, and more.

There were straight allies sharing posters with their non-straight friends and family. There were Christians, Jews, Muslims, and Atheists. There was even a dog wearing a shirt with a jeer at Trump and Russian president Vladimir Putin.

At one point, Governor Ralph Northam arrived. I did not get to hear him speak, but I saw photos of his visit. He led the crowd as we began to march.

It took me a moment to get into the chants. Having attended a national march for climate change in April 2017, I was familiar with how they worked. But I am a shy, anxious girl, who prefers to stay quiet whenever possible. Soon, however, the energy of the crowd filled me with a similar spark of confidence. I first cheered quietly, but began to get louder and louder in a crescendo of confidence and determination. Towards the end of our walk, my friend and I even led a chant for our section of the march. We counted to three and began to chant. The crowd quickly followed our lead. It only lasted a few seconds, but it was amazing.

Eventually, the sun started to come out. It was Mother Nature, supporting us in one of our many causes: saving the Earth and preventing further global warming.

We continued down the street. We stayed on the sidewalks, thrusting up our signs whenever a car passed by. Every time a car honked, we cheered as loudly as we could. We were full of adrenaline and that rare, enthusiastic marching energy, when you are fearless, strong, and confident. When you are invincible and unstoppable.

The chants kept coming. One of the most popular ones was “We want a leader, not a freaking Tweeter!”

Richmond’s very own protest choir, Rise Up Sing Out, was in attendance. They marched as well, singing their own songs. “My mind is made up / I’m on my way up / Gonna hold my head up / And walk on in love.”

As we came to the end I was surprised. It was already over? The march had lasted a mere hour. I was disappointed as we returned to the parking lot. But I couldn’t help but smile. That one hour was easily one of the best hours of my life. 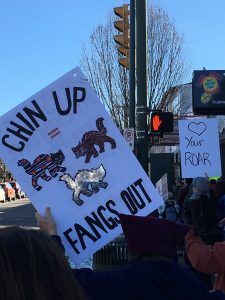 Even as the day progressed, and we moved on to do other things, all I could do was babble about the march. It was truly a moving experience for me.

To some people, a march may be a waste of time. A critic might argue that protesting just takes up time, money, and space, and that it doesn’t actually achieve change. But a march is certainly not worthless. It is the opposite of that. Marches are for joining together to fight for what is right. And we did just that.

On Saturday, we fought for many things. We fought for the rights of transgender people to use whichever bathroom they identify with. We fought for immigrants being separated from the lives they’ve known for years and sent across the border to a country they barely know. We fought against police brutality. We fought for the poor struggling to feed their families. We fought for people of minority religions who are judged despite the freedom of religion Americans have.

America is a big country. Planet Earth is even bigger. Relative to those things, I seem like a mere speck of dust. One person may not seem significant. But still, I fight. Because my fight can lead to another’s, and another’s. The first ripple of activism can and will lead to a tsunami of change. Together, people can create change. We can make a difference.

The day of the Women’s March changed my life. The voice that had swum around in my head for years, desperate to make itself known, had finally been freed.

I now know that there is nothing more beautiful than working together to make your voice heard.