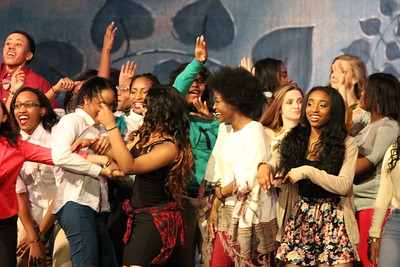 Senior Toniqua Freeman steps on stage dressed in her long, blue prom dress. She stands next to her partner and waits for the music to begin. Once the music starts, she circles around her partner and awaits her turn to model her prom dress. Freeman and many other students participated in the annual DECA Fashion Show; the show was held on Friday, March 18th, at PGHS. There were tryouts that happened first, which determined students’ spots in the show.

“[The tryout] was long, but not hard. It was the first scene [of the show]. I just had to remember it step by step,” Freeman said.

Once the students tried out and made it in, they had to work hard during practice. Kimberley Beales, the DECA Fashion Show Instructor, was hardcore about practice.

“We are there to practice, not to play. We did a lock in which was different, and we worked hard,” Beales said.

For Freeman and the other students practice was intense.

“The practices really had me scared for the show. There was a lot of yelling, tension, and disagreements. It seemed like we kept doing the same scenes over and over, which was repetitive and tiring,” Freeman said.

During practice, one of the biggest discussions the students received was about the dances.

“The longest dance to learn was Focus by Ariana Grande, since it was two parts and we had to wear heels,” Freeman said. “My favorite dance was wall to wall (by Chris Brown). It seemed like we turned into guys, because we came out sassy and then it was all over once we started stepping,”

The second biggest discussion was about the clothes that would be modeled.

“At first it was a huge discussion. Not everyone could find the same attire, so we switched some of it up last minute,” Freeman said, “All in all, it came together and we all looked great,”.

Freeman enjoyed all of the scenes she was in, but a couple stood out to her.

“The Prom scene was my favorite, because Prom season is right around the corner. Getting dolled up, and pulling out my Prom dress from last year just made me think about all the fun that is in store for this year,” Freeman said.

Not only did the excitement of Prom and getting dressed up hit an emotion for Freeman, but so did the senior scene.

“It was really emotional, we tried not to cry, but it happened,” Freeman said.

Through the tears, smiles, and laughs the show was a success.

“It was probably our largest attendance ever. There was a lot of interaction with the crowd which we love,” Beales said. “I think it was awesome. This kids worked really hard. When you work hard it pays off.”