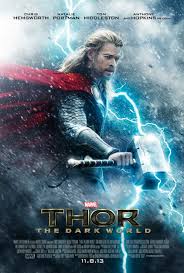 Or, as I affectionately call it, Thor: The Dark Plot Twists.

As a sequel to the Marvel film introducing the hammer-wielding hero, this movie had big shoes to fill. And fill them it did. According to the Washington Post, Thor 2 has grossed $327 million dollars worldwide since its release. So what has made this movie so interesting to its viewers?

What makes Thor 2 such a hit is that it has many classic Marvel elements as well as new, darker themes.

Some things just can’t be kept from a Marvel movie, like sarcastic one-liners, romantic interests, and of course, a cameo appearance by the incomparable Stan Lee. Most Marvel fans know to look for the

comic book legend to make a small appearance in any Marvel movie, but when you see him, I would not recommend doing as I did and jumping up, pointing, and screaming “Stan Lee!” Inevitably multiple mothers will shush you and some bolder moviegoers will yell at you to “sit on down and eat your popcorn!”

Some elements newer to Marvel productions are the darker themes in this movie. Throughout the film, the colors of blood red, dark gray, and pure black make recurring appearances, giving many scenes a downright sinister look. This horror movie motif is also reflected in the costume design for our hero’s enemies, the Dark Elves, who wear creepy, monochromatic masks that make it seem as if Marvel’s costume department stole some props from The Purge. Perhaps the most prominent features of this movie are the sudden, unexpected plot twists. They come so quickly that you’re left sitting there wondering what you missed. Then it sinks in and the whole theater screams “No!” right along with you. And just when you think they can’t surprise you with anything else…well, let’s just say that the last few seconds of this movie may be the most important.

Thor: The Dark World is an action-packed film full of humor and drama that will keep you on the edge of your seat. The otherworldliness and suspense make it an enthralling movie to watch, perfect for many audiences: superhero enthusiasts, action lovers, and even families (although those who are super squeamish may want to look away every now and then). This is one sequel that actually lives up to the glory of its predecessor.

Local bands: behind the music