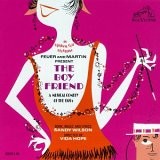 The setting of the play is in the French Riviera. Polly is an English heiress who goes to the Mme. Dubonnet’s Finishing School and has no escort for the dance coming up. She falls in love with a delivery boy named Tony and to heed her fathers warning about fortune seekers, she posses as a working girl.

Miss Polly played by Emily Haswell, Tony Bruckhurst Polly’s “boyfriend,” is played by Chris Withers. One of our own students, senior Russell Slouffman, also has a lead role, Bobby. Russell Slouffman was hoping to get the role of Bobby.

“[I wanted to be Bobby because] he has his own dance, its called the Charleston and he has his own song to go with it with his girlfriend Macie,” Senior Russell Slouffman said.

Russell was also in the previous play Pippin with another PGHS student, senior Megan Tate. In this production they were both assumable members.

There are 10 parts in the Boyfriend (five female and five male). There were over 20 people that auditioned for the roles in the play.

“I encourage all people that are interested in theatre to come and audition for Fort Lee,” Tate said. “Fort Lee is just amazing.”