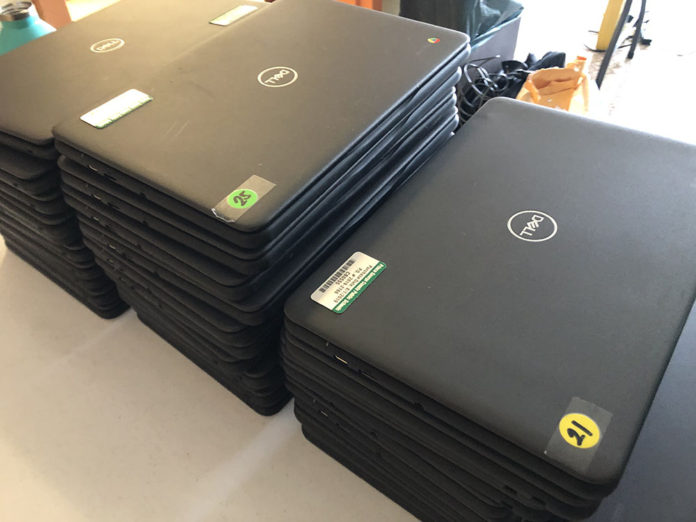 With the wind blowing on a bright sunny day, students approached the entrance to B-wing at the high school where ITRT Lisa Taylor handed out bags with new Chromebooks and WiFi hotspots.

On Tuesday, April 21st, distribution of Chromebooks and Wifi hotspots began. Instructions were handed out along with these items. The materials are intended for students taking credited courses to have access at home to work on assignments. This is the county’s first one-to-one program in the midst of the COVID-19 closure.

“I was part of a team that consisted of three of my coworkers in the IT department, the technology director, as well as Stephanie Bishop and Robin Germanos,” Taylor said.

Surveys were sent out to determine the need for these materials. Once these surveys were returned, the staff began ordering and preparing for distribution.

“We had gotten surveys back saying roughly 250 Chromebooks and 40 hotspots would be picked up [Tuesday],” Taylor said.

“Another survey will be going out soon to see if there is still a need, and what the numbers are,” Taylor said. “The devices will need to be returned prior to the beginning of the 20/21 school year.”

If you are in need of one of these items, fill out the form attached to the link below.