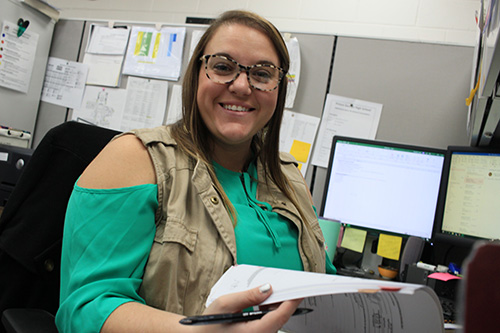 Shocked into panic mode as the electricity of the building goes into an unprecedented shut down, the principal’s secretary, Hannah Taylor, is on the frontlines, immediately establishing communication throughout the chain of command, adapting to the ever-fluctuating conditions of her job.

Taylor was born and raised in Prince George County, but she had no prior intentions of working for the school system until she was influenced by her aunt, Megan Wilder, and further supported by her family and friends.

“I never imagined that I would work in Prince George, it wasn’t a dream come true, that would be dramatic, but it really worked out because I didn’t want to make that drive to Richmond every day and I think I just kind of found my niche,”  Taylor said.

It requires independence and reliability in order to fulfill the numerous duties that she is responsible for on a daily basis. One of Taylor’s largest contributions  is her flexibility.

“No day is the same as yesterday, and when things happen like the power going out or the bells not working, it creates chaos for me. Immediately we’re on the radios, we’re trying to communicate, everyday it’s something different,”  Taylor said.

Though the hectic conditions of a power outage are extreme, there is no pattern,  predictability, or way to see what is coming next. With all of this, her job title comes with no true definition.

“I am Mr. Nelson’s secretary. I hold the records for a lot of personal data for the teachers; I’m kind of like the pinpoint of information from the school board to our faculty and staff, but I pretty much do whatever Mr. Nelson tells me to do,”  Taylor said.

Head principal Mike Nelson has been working with Taylor for years and has developed a bond with her.

“Last year she developed a career fair, largely on her own, which was fantastic, and recently she has been working on collecting federal account cards. She’s always very positive and always rises to the occasion.  She’s always interested in taking on more and always strives to do her best,” Nelson said.

Her regular day-to-day routine is more collected and easily adjustable, usually being occupied by a series of email checks, bell changes, or handling any other operations throughout the week.

“When it comes to my daily routine, I get here and start pulling up emails; if it is an activity day, I’m the one changing the bell schedules. I organize and list off who’s meeting and where they’re meeting.  I kind of act as the operations of the building a lot of times,”  Taylor said.

It’s not easy for Taylor to balance the responsibilities that are demanded of her, but she manages to complete everything in a timely manner.

“Time management and juggling is the most difficult part of my job; I really don’t have like ‘this is my job, this is my job title’ it’s kind of an open book.  I’m an umbrella of things, so although I may not change the bells every single day, when they’re not working, I’m calling them; so just things like that,” Taylor said.

Through all of the struggles that she deals with, every single day she is reminded of the reasons why her job is worthwhile.  Taylor loves to notice the change that she gets to make in the lives of the students that she has the opportunity to work with every year.

“We have student workers, and obviously I don’t teach, but the kids come in and help me and Ms. Topian with certain tasks. I feel like I get to make a difference by teaching job skills like clerical responsibility, deadlines, things like that. That’s the most rewarding thing,” Taylor said.