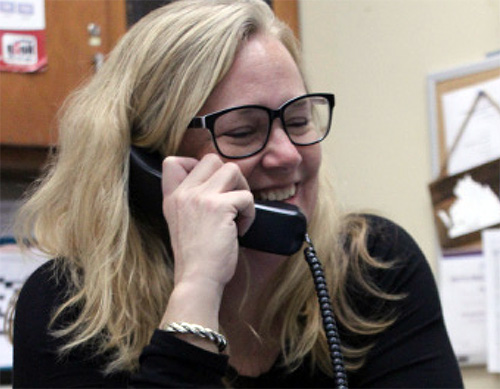 Seeing many students a day for a variety of reasons based on illnesses or injuries, filing, contacting parents about their students, collecting paperwork from healthcare providers, conducting hearing and vision screenings, distributing medication, school nurses have a lot on their plate.

School nurse Tonya Bryant, for the past three years, has been through many challenges on her career path that have led her to where she is now.

“My previous job relocated me and I wasn’t willing to drive an hour to get to work,” Bryant said. “School nursing was something I had wanted to do and as luck would have it a position was open so I applied and got the job.”

Before being a school nurse Bryant worked for Sheltering Arms. But before she was even working at Sheltering Arms as a nurse case manager her path in the medical field began when she was 18.

“My dad was a firefighter and had to go through EMT certification and he asked if my sister and I wanted to take the class with him to do something together,” Bryant said.

She enjoyed the class with her father and sister and began to seriously consider it as a career, but unfortunately, she was not able to handle a major part of being an EMT, working in an ambulance.

“Part of that [EMT certification] is practicing in the back of the ambulance,” Bryant said. “And every time I did that I got car sick so that’s not a good place to work at if you’re an EMT.”

Since she had trouble working in an ambulance, a colleague of hers suggested that she considered nursing as a career instead. She eventually ended up enrolling in a nursing school, where she faced another challenge.

“Just being a new mom is a challenge within itself and so is being a student,” Bryant said. “I decided to have my child while I was in school and I had him on a Tuesday and returned to school the following Tuesday.”

Bryant faced some challenges trying to balance between being a brand new mother to a newborn and being the best student she can be to get her degree. Although it as difficult she knew finishing nursing school was vital for providing better for her child and advises the same to other parents who are going through the same situation.

“It is a lot of work but it will pay off,” Bryant said. “Try to be forgiving of yourself because you will feel as if you are not giving enough time to your child or your schoolwork but when you graduate you will be able to provide better for your child.”

“My sister convinced me that I could finish my nursing school and be a brand new mom at the same time,” Bryant said.

Bryant’s sister, Tessa Ferguson, has been her biggest supporter for almost her entire life.

“She helped with everything from running errands for me to just being a sounding board when I’m stressed and she’s the kind of person that can be honest and tell me when I’m not making good decisions.”

After finishing nursing school and working at Sheltering Arms, Bryant finds pride in her job with the school working with students.