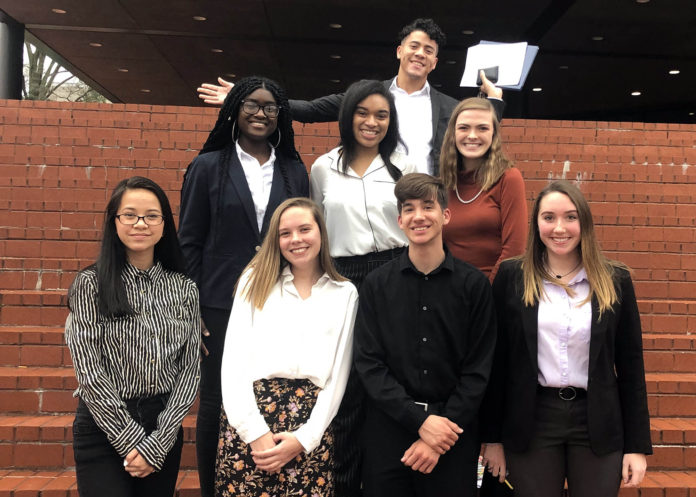 The tension in the room is high. The only sounds you can hear are the lawyers organizing their opening statements. The witnesses prepare there testimonies in their heads as the Bailiff calls the court to order. The judge enters the room and everyone rises. “The Court will now hear the case of Long vs. Craig,” the Judge said.

Model Judiciary is a program where students from different schools are given are given a court case and compete against each other in a real court to win their case. This year, the students representing Prince George were given a civil case to go up against James River High.

Along with Prince George and James River, many other schools met at John Marshall Courts Building in Richmond Virginia. Each team has prepared their cases for months to be put to the test on Monday, February 11th. Each team acted as if it was a real case infront of a real judge.

Senior, Jhadien Harris, participated on the jury this year. As she a watches from the jury stand, she describes her expirence as it being intense from observing her peers go head to head.

“You have to put in a lot of work. Even the extras have to remember a lot. There’s a lot of acting and it is really interesting,” Harris said.

Even though Harris did not play a lawyer or a witness, her role was just as important. As apart of the jury, she along with the other jury members, decide the fate of the made-up defendant, Veronica Craig.

In the end of the case, the jury of the court decided to side with the Plaintiff, James River, and “sue” the Defense, Prince George, for $22,000. Although the students of Prince George lost the case, everyone who participated got an amazing experience and practice of what a real life court case is like.

“We lost, but in the long run we figured the whole thing out so it was okay,” Harris said.

Three Up Three Down Podcast With Wade Clements And Quincy Sippio...