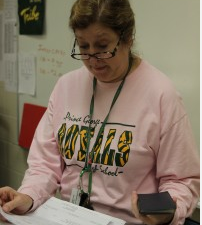 Cynthia Hasley stood with frustrated tears pouring from her eyes as the last School Board member finished explaining to her why they could not offer her any alternative to their new mandated health plan. Hasley had spent months battling the plan as communication representative to the high school, speaking out at multiple open budget meetings and rallying the teachers, but there was nothing left she could do.

“I knew things would change around here, and they have,” Hasley said.

Under the new plan, teachers are responsible for a much larger proportion of their healthcare coverage. They pay a flat rate of $51 per month for coverage and contribute as they wish to their health savings account. That not does include any actual healthcare payments. Any treatment is completely out of pocket until a teacher meets their deductible of $2,500. After they reach that, coverage is a 30-70 split covered and out of pocket until they reach their $5,000 cap, after which they receive full coverage. Previously, teachers paid about $90 a month for coverage, with a $15 co-pay for a regular doctor’s visit and $30 for a specialist visit.

“We had to make the change because of our budget,” Kim Thayer, healthcare specialist for the county, said in a phone interview. “If we had continued on the path of traditional health insurance, we would have been spending as much on healthcare as salary for our employees. We’ve been considering this for two or three years. This was a not an easy decision.”

Rising healthcare costs were absorbed by the school system previously, which used up all of their savings and prevented teachers from receiving a raise in the last six years.

“The majority of our employees are in a pool together. Under our Anthem health plan, when some users required more care, it drove the cost up for everyone. Under a high deductible health plan, we’re still all together, but eventually high users will be talking on a larger financial responsibility, keeping costs low for the rest,” Thayer said.

The new policy was implemented July 1, and Hasley has already reached her $5,000 cap.

Hasley has considered leaving the school system because of her rising healthcare costs.

“I’ve asked for some letters of recommendation and have been revising my resume,” Hasley said. “I’ve heard from some of the newly hired teachers that if they weren’t covered under their spouses’ insurances, they wouldn’t have taken the job. We might be losing good teachers. We need real healthcare, not this sham of a policy. They should think more of us—we don’t feel valuable when we get scraps like this.”

Thayer is also concerned the county may lose teachers because of the plan.

“The first year, it’s a lot, [and] it’s scary, and you’re worried about what ifs. Out pocket costs can be devastating and we understood that,” Thayer said. “High deductible plans are what insurance companies are moving to. Our [previous] Anthem policy was moving to a high deductible health plan as well. Hopewell and Dinwiddie already have a high deductible plan, and Chesterfield is considering going to one.”

Melissa Face has taken over the position of communications representative for the high school from Hasley.

“So far, I haven’t used my plan. I haven’t been to the doctor since July 1, when the change took effect. I’m lucky I had my child on the old plan. A lot of people aren’t so lucky and have chronic conditions that they might’ve been born with or can’t control,” Face said. “I haven’t used it because I’m scared. I’m putting $150 more in monthly, and the potential to lose income is so much greater. You could lose a potential 5-10 thousand out of pocket, which is astronomical.”

Hasley cites the major drawback is the total amount of money teachers must put forth before they receive any coverage.

“We’re not wealthy. We’re not in this for money, but we want to make a decent living. We haven’t had a real wage increase in eight years, which causes stress, which leads to poor health, which leads to higher healthcare costs. We’ve always been paid less than our degrees are worth, but we’ve been compensated with good benefits, including healthcare. Taking that away, we’re definitely underpaid, and that’s not including extra hours,” Hasley said.

County employees’ healthcare also is covered under Cigna, but the county funded healthcare for its employees but denied the Board’s request to fund teachers’ insurance. The School Board was not given a sufficient budget from the county to fund its own healthcare.

Hasley views the policy as discriminatory because teachers have no other healthcare option, while county employees have their choice of two plans. County employees can still access the previous 15030 plan or a high deductible health plan, which they are not required to pay a flat rate for, with a lower deductible of $2,000 and an out of pocket cap of $4,000.

“The school board should revise their policy by giving us a choice [in our coverage], or letting us go back to real insurance, not this catastrophic mess,” Hasley said.

Face does note benefits in the new plan, but she believes it is not the best fit for teachers.

“It has potential for a tax break and to accumulate a nice sum of money, but that would take lots of time and years of good health. It might be good for some businesses, but not for teachers. Our salary can’t support that kind of expense,” Face said. “The biggest fear factor is not knowing the cost of a visit, which leads to reluctance to go the doctor and potentially going without treatment because of the expense.”

Face does not believe that the plan will be revised any time soon and believes that this kind of health plan will only become more and more common.

“People have been sharing their personal experiences for me to take to the communications committee, which the best way to describe what’s been happening financially. This is a huge money saver for businesses,” Face said. “I haven’t been told of any hope for [changing the policy].”

“We are initiating the request for proposal to shop for the cost to the county and the school system to switch policies or change the plan we’re offering,” Thayer said. “ We won’t know until December and will hopefully present a new policy to the Board in January.”