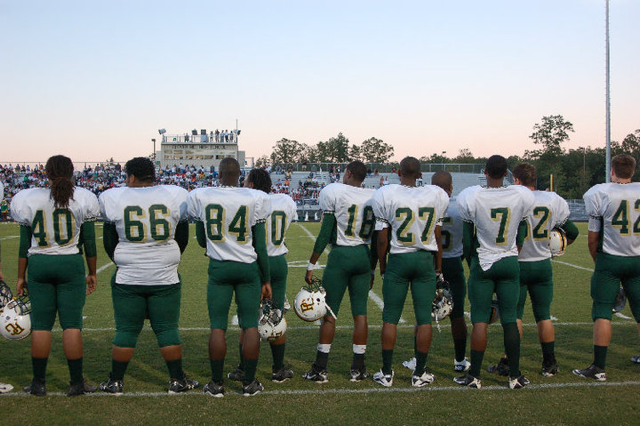 The quarterback takes the snap and drops back into the pocket. He fires a bullet to a receiver coming over the middle. Just when you think he is going to get a big gain a linebacker comes out of nowhere and lays a big hit on the receiver. The receiver gets up, but is dazed. The referee notices but says nothing.

“If a referee told me to leave the game then I would be mad and try to argue with him,” said senior running back/linebacker Lawrence Taylor.

“At first I would be mad but then I would look back and see that he was only trying to help me out,” sophomore running back/linebacker Caleb Johnson said.

The player must then be checked out by a certified medical physician. If the player is cleared, he can go back in, but if the player is found to have a concussion, he cannot participate in activities for the rest of that day and cannot return to physical activity until he is cleared.

The new policy also says that each school division must set guidelines and policies to educate coaches, parents, and players. Such as making sure that each year the player and their parents review information on concussion and sign off that they received that information. They must also set guidelines on the identification and handling of concussions.

“It is the correct way to go,” junior linebacker/running back DaQuon Chapman said. “Getting a concussion never crosses my mind while I am playing.”

Concussions have become a topic of concern in not only high school but also in professional and college athletics. The problem is that the athletes are coming back too soon after getting a concussion, or they are not being checked out by proper medical physicians. Concussions are a form of mild traumatic brain injuries.

“A concussion is when you are hit forcibly and your brain moves and hits your skull,” school nurse Kimberly Brown said.

During the October 22 football game against Thomas Dale, junior kicker/punter Travis Taylor was diagnosed with a concussion. He was taken out of the game and did not return. “When I got to the sidelines they did a flashlight test,” Taylor said.

Symptoms that doctors look for when diagnosing a concussion are headache, blurred vision, unequal pupils, nausea, and confusion. Treatment includes Tylenol for the pain and rest with no physical activity for 1 week.

Even after one week of rest, the player will still need to get medical clearance by a doctor or another certified medical physician.
According to the Roanoke Times, after a player is cleared to play they still need to be eased back into playing. This is done by first doing light aerobic activity, followed by sport specific exercises such as drills. Then non-contact drills precede full contact practice. By doing this, the player insures that they are ready to get back on the field.

VHSL has made these changes to its concussion policy for the safety of the athletes involved. People agree that they are good changes. The changes will hopefully have an immediate impact and help players when they have concussions.

The Art of Yelling