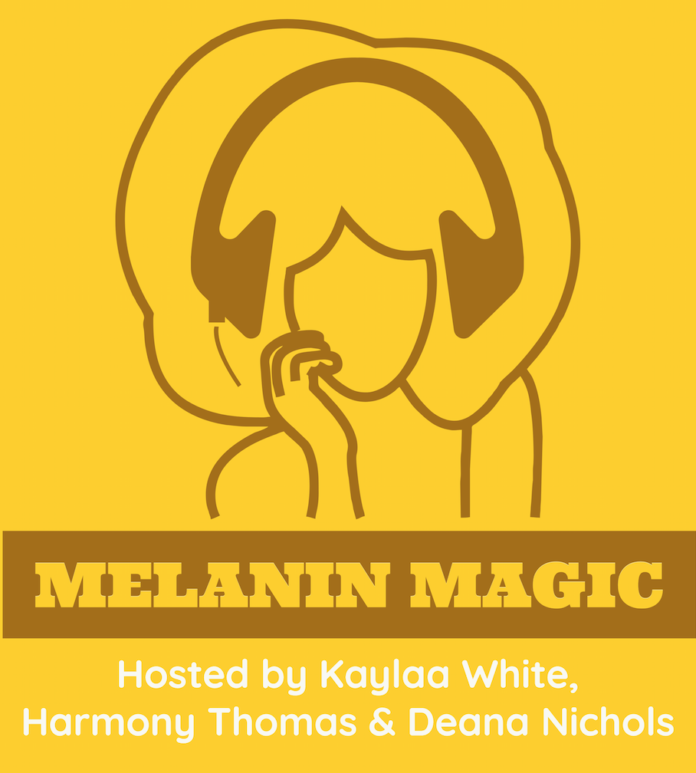 This podcast aims to celebrate black women and colored culture because of the lack of representation in our community.

Hi I’m Harmony Thomas. I’m a senior at Prince George High School. I like dancing listening to music and writing.

Hi, I’m Kayla White. I’m a junior at PGHS. I like politics music and writing.

Welcome back to Melanin Magic. Due to school closings because of COVID 19 this episode will be an over-the-phone interview with Prince George High School Teacher of the Year Ms. Monte Williams with one of our hosts Kayla White.

KW: What college did you attend and why?

Williams: I attended Hampton University and why because my parents wanted me to go to an HBCU. My heart was set on going to Old Dominion University. I had gotten accepted and everything but they pushed toward an HBCU and Hampton was it.

KW: What kind of area did you grow up in and did that shape you into being the adult you are today?

Williams: I grew up in a rural area and in my high school everyone knew each other. You were either related to someone or closely connected in some kind of way. It shaped me because it was a small community. Even though the experiences my not have been varied they were still good experiences.

KW: What inspired you to become a teacher?

Williams: My youngest brother is about 14 years younger and he had a hard time saying my name when he began to talk. I worked with him all of the time in order to get him to say it correctly. I think that may have been the first moment that inspired me to become a teacher.

KW: Were there any obstacles to overcome to become a teacher?

Williams: Yeah starting out growing up, I was raised by my grandparents. My mom made that sacrifice because my dad died when I was 2. So just overcoming that and the bitterness I had as a young child helped me. So I had to overcome that just to get through growing up and then another thing I had to overcome was becoming pregnant with my first child my senior year in college. It was my goal to go to grad school right after college but I had to put that on hold so I could stay at home and raise her. So those were just a few: being raised by grandparents and becoming pregnant my senior year in college.

KW: And did you decide to go to grad school after your daughter had grown up?

KW: And was that also at Hampton?

Williams: No, grad school was actually through ODU.

KW: So you got to go to your dream school after all?

Williams: Yeah even though it wasn’t on campus because they made classes easily available for working adults, working teachers. It fit my schedule. I could have my family take care of her while I attended classes at satellite locations. Then my masters came later at Virginia State. So the HBCU thing is still there.

KW: What brought you to Prince George?

Williams: Actually, I was at another division for 17 years even though I lived in Prince George, I still worked at another division that was about 25 miles away. It was when my son was getting older that I decided to move to get on at Prince George so that I could be more involved with things at his school and the community and get to know a little bit more about the people around me. It was tough to do that working in another division. That was one reason why I jumped on the opportunity to apply to Prince George about five years ago.

KW: What is some advice you have for young teachers?

Williams: Reach out to other teachers no matter what. Reach out whether they are in the same subject or in the same building. Reach out. Nowadays we have Facebook, podcasts, email… so many things available so that you can connect with others. I think young teachers are eager to get things right all the time, but sometimes they are going to need to lean on someone else, hopefully someone who is in the education field. The other thing is time management. I have been doing this job for 21 years and I still have a problem managing my time. But the key is to manage your tasks so you can check things off of your list. And the last thing is to take care of yourself. Listen to your body. I think teachers tend to come to school when they don’t feel their best but we do need to take breaks. We get one mind and one body. Sometimes we need to take a break from the education just to take care of ourselves. We need to treat our minds and bodies like precious cargo.

KW: What is some advice you would like to give to young African American women?

Williams: Establish a great support system whether it be family or friends. I feel that African American women have to push a little bit harder. I have encountered people who don’t like me because I am a woman or an African American woman, so I have had to rely heavily on family and friends. Sometimes the family may not even be biological family but just a group of people that you can just establish a bond with and have your best interest at heart. It is tough to do things on your own, so sometimes you are going to have to rely on others. Build a network of people around you.

KW: Moving away from your career, do you feel in general are there obstacles that you have to overcome being an African American teacher?

Williams: Yes – but not necessarily as a teacher. I can remember going on an interview years ago in a business, I have a unique name, and the receptionist was surprised to see… she knew that I was a woman… but that I was an African American woman I think that threw her for a loop. I felt like our interactions changed from the interaction we had on the telephone. I was offered the job but because of that initial impression had a negative impact on me, I did not take a job with that company. I felt uneasy about it. People shut me down because of what I look like. I can’t change who I am. As a teacher I haven’t had that experience but in the private world the business sector I have.

KW: I think that has become an issue I have discovered when I talk to older African Americans with unique names they’ve had to either alter their names on job applications or only go by a certain half of their name if they have a hyphenated name. I remember talking to my theatre teacher at Clements, Mr. T’Daryl Perry and he remembers getting advice from one of his colleagues to only go by Daryl. And he would have more acting opportunities in the acting field because his name wouldn’t be so ethnic. He took that as actual motivation to use his first name more because he felt like this is “my identity” and this is my culture that my people have been affiliated for so long and it helps to prevail through the mishaps we’ve had.

Williams: It is a shame, whether you are male or female, that as African Americans how your name would cause people to judge you before they even meet you or know what you are about, or even see your work ethic. It is sad but it is a reality we live in.

KW: Thank you so much for agreeing to do this interview.

Once again, we would like to thank Ms. Williams for her interview and want to commend her for her achievement. We hope you are being safe and healthy and we will be back next week.

This is Harmony, Kayla and Deana and this has been an episode of Melanin Magic.