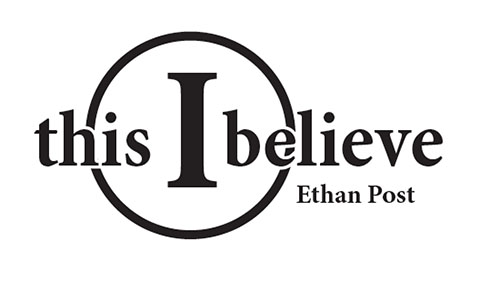 No one is perfect. With that being said, everyone makes mistakes. However, how we recover from our mistakes, is what defines our character. This I believe: that people learn from their mistakes.

A mistake does not necessarily have to be horrific like a crime, but simply a flaw in an experiment, a fault in a sport, or getting in trouble in school. Despite encountering some of those past examples, I have always come out with new knowledge. No matter the circumstance, there is always a lesson to be learned.

At the end of every experiment, there is a part where you consider what could have gone wrong or what did go wrong. This of course could give a reason for why you got a certain result, but also helps you in future experiments so you won’t make the same mistake. A condensed explanation of this can be described as trial and error. Trial and error is not confined to just experiments and could be any task in day to day life.

For me, I have been trying to figure out how to do a card trick and at first it was quite horrible. Then, I started to examine what I could be doing wrong and as a result, I was finally able to resolve my mistakes.

This past year, I decided to take a shot at wrestling. I had always wanted to try wrestling growing up, but I never ended up going through with it. It’s my first year, and being in 11th grade, I started late.

A lot of the opponents I have faced are experienced wrestlers. To be frank, it has been rough. However, with the coaches’ advice, I have gotten much better and have fixed the mistakes that I’ve made.

As for more serious mistakes including crime, I still believe everyone learns from their mistakes. Although, the lessons learned aren’t always positive. A criminal can either be completely transformed by the experience and become a better person, or they figure out a better way to commit the same crime and not get caught. Either way, they are still learning from their mistakes.

In the end, whether positive or negative, everyone learns something new from their past failures. Everyone has failures, and our response to these failures build our character. Without mistakes, our world would be perfect and there would be no diversity. Everyone would be the same and the Earth would be tasteless. In a way, our shortcomings are a blessing.

This I Believe: Miracles Can Happen

Pro/Con: Should Abortion Be Legal?