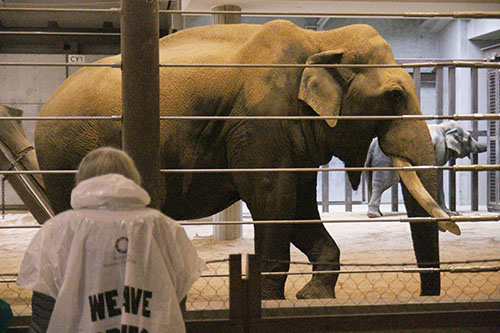 From the large and spiky alligator snapping turtle to the long billed pink roseate spoonbill the Smithsonian National Zoo in Washington D.C. has over 390 different species of animals. The zoo provides an escape for families with young children to learn about creatures they may have never known about.

The zoo is more than just a place to see and take pictures of animals, it’s a conservation for endangered and threatened species. The zookeepers and volunteers hope people leave with more knowledge of animals when they leave.

The Smithsonian Zoo was founded in 1889 with the sole purpose of conserving the lives of endangered animals. There have been many changes to the zoo, but the heat had remained the same. The Conservation Biology Institute has worked to better understand the animals and help limit extinction. In the year 2019, the zoo now houses more than 2700 animals.

“The zoo helps animals from going extinct,” said Gabriel (last name to be omitted), an elementary school student visiting the zoo with his parents.

Some animals need to zoo a safe haven. Without the support of the Smithsonian staff, these species might not be thriving the way they are today. For example, the panda Bei Bei was recently sent back to China from the United States.

“I feel like the pandas wouldn’t really survive on their own in the wild,” Elisa Talmage, a high school teacher and Arlington, Virginia resident said. “I think the zoo is doing a lot of good things with their rehabilitation.”

While people see the zoo as a conservation for the endangered, some see it as a place for animal captivity. With animal cruelty and endangerment being an important issue in the animal lover community, seeing the innocent animals behind a fence breaks their hearts. People can choose to stand up for the rights of those who can’t speak for themselves.

“I only agree with endangered being placed in zoos as rehabilitation centers,” Prince George High School senior Raquel Montgomery said. “If there is no reason for them to be there then I don’t agree.”

The one thing many people often miss are the signs of various sizes. These signs identify the animal and usually give an interesting fact. Some even are interactive for children to retain the information in a more amusing way.

The Smithsonian continues to hold programs and tours for people 364 days of the year. ZooLights is being held this holiday season. Come stop by with your family to make a memory that will last a lifetime. Throughout the year, you can participate in feedings, discovery events, and even sleepovers.

What is your opinion. Click below to take the poll.

Thornton Named Region I Teacher of the Year