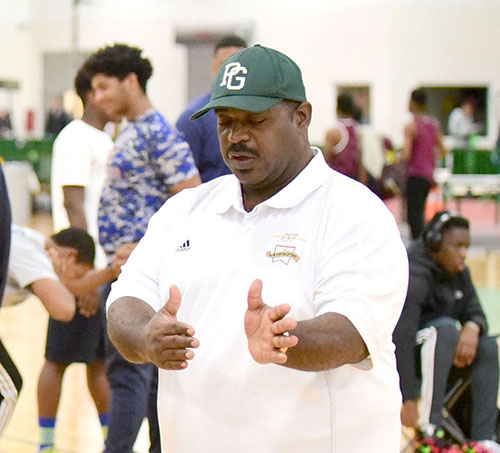 Walking through the hallways, over a thousand students go about their day without thinking about who keeps the school clean and running smoothly. Behind the scenes are the custodians who make sure the school is ready everyday. But the one person who has overseen the operation for 30 years is head custodian Bryan Griffin.

Along with being the head custodian, Griffin is also a track and field coach. He is always on the lookout for the next great track athlete.

“Coach Griffin is really good at keeping us motivated on and off the track,” senior Gabbey Miner said. “Also, Griffin is able to push us and keep the atmosphere light, so he gives us hard work but keeps positive.”

“I guess I look at them [students] to size them up to see if they are mentally and physically able,” Griffin said.

While Griffin hopes to increase the number of members on the track team, the current members have formed strong relationships with him. Miner is a sprinter but enjoys talking and joking around with Griffin outside of track.

“My responsibility as a custodian, being that I am the lead custodian here on the day shift, is to make sure the building is open in the morning and everything is clean that was not clean from the night before,” Griffin said. “We have to make sure it’s up and ready for that day of operation.”

Like most jobs, there are challenges that come along the way. The biggest struggle for a custodian is cleaning up messes left intentionally on the lunch tables by students.

“It’s frustrating when the trash can is right in front of them and they just get up and leave everything like it is,” Griffin said. “Then when you  bring it to their attention, the first thing they say is, ‘It’s not mine,’ but I just finished looking at you get up from the table.”

Growing up in a household who believed in putting others first, Griffin has a heart to serve his community and those around him. His mother taught Griffin to do what is right no matter the situation.

“She’s not here now, but when she was here, she always wanted to do the right thing, always tried to help somebody as much as possible,” Griffin said. “You should make somebody look for the right way to do certain things.”

The best part of the job, for Griffin, would be seeing his previous students when he is out in public. It is a time to see and catch up with prior students and hear about the change in their lives.

“It’s wonderful to hear from them after they’re gone,” Griffin said. “That means that you’ve done something in their life to make them feel good about themselves, and that’s what I enjoy.”

Griffin continues to make an impact in students’ lives in a monumental way, not limited to those on the track team. What he does, does not go unnoticed. This impact on young people is what brings him back everyday.

“I appreciate that Griffin cares about the team’s performance, as well as the people on the team itself,” Miner said. “He’s my number one!”

Triangle And Two Podcast With Coach Carr And Johnny Soto