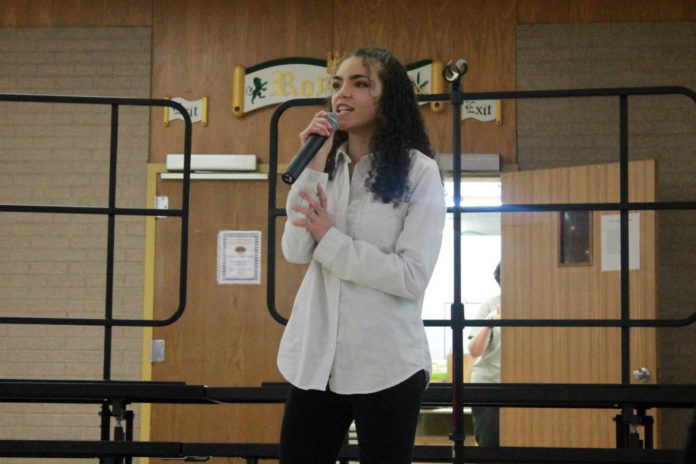 Choral Director Storm Burks and the choir students provided food and entertainment for those who made donations to their trip to perform in the nationwide competition. This year was the first year Treble Choral was added to their performance, making this the biggest Spaghetti Dinner so far.

Junior Chamber Singer Amanda Harris both served food and provided entertainment when she sang ‘Alone Together’ by Sabrina Carpenter as a solo and Ashley Tisdale’s cover of ‘Exes and Ohs’ as a duet with Senior Rylee Hughes.

“I enjoyed how everyone was working together. Some people had performances and some people had to keep their tables covered, so I really liked working with Chambers and Women’s (Treble Choral) to get everything together to get everything done,” Harris said. “Last year and the year before it was just Chambers… we wanted to include them in competing which means including them in fundraising for the competition.”

All of the food, raffle prizes, and decorations were donated from businesses in the local area to help support the choir department.

Students sold tickets to the event and used profits to help with the cost of their trip so they can have the opportunity to compete in front of critically acclaimed judges. Profits from tickets sold at the door as well as tickets sold for the raffle were added to the mutual fund to benefit all of the students.

“I was at the table with the raffle tickets, I was incharge of counting the money and giving people their raffle tickets. I was part of both the overall [performance with Chamber Singers and Treble Chorale] and I had an individual performance with Kaitlin Brantley, we sang “Jar of Hearts” [by Christina Perri],” Senior Nikaylah Brown said.