The annual powderpuff game saw the Class of 2019 start strong and finish the second half with their defense holding the juniors scoreless.

Senior quarterback Kyla Nase scored the final touchdown of the game in the 2nd quarter with a 3 yard run to help her team to a 16-9 win over the juniors.

The juniors started the game three points ahead by bringing the most canned items in to help the local food bank out.

The first score of the game came from a long pass completion to senior Lauren Peade from Nase. Peade got past the junior secondary and snuck in behind the defenders to grab the ball and walk into the endzone.

“I was actually surprised we did well throwing the ball. I had a decent arm and my wide receivers could catch the ball but we just couldn’t connect,” Nase said. “Last year we threw the ball once in the game and it got intercepted so I was skeptical on throwing a lot this year.”

Nase added that during practices they focused more on running the ball and when they got into the game the juniors quickly picked up on the run plays. They had to adjust and so Nase chose to start throwing to gain yards quickly.

“I was surprised the throws were effective especially because Lauren was being covered by two girls the whole game,” Nase said. “Towards the end of the game I just told both wide receivers (Jalyn Knight and Peade) to just sprint down the field and get open because the ball was coming.” 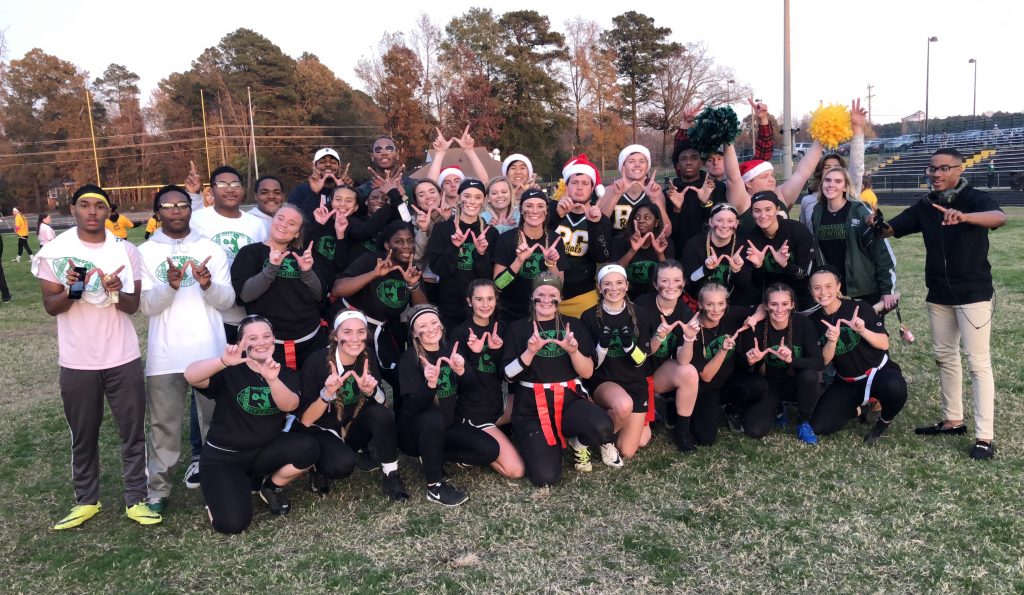 The seniors scored again just before half when Nase ran three quarterback sneaks in a row. The juniors didn’t even have a chance on offense until the seniors had possessed the ball twice due to two recovered on sides kicks.

The juniors’ defense scored their only touchdown when a defender grabbed a botched pass in the backfield and ran 50 yards for the score.

“We had this play called ‘banana split’ where I would receive the ball then the wide receiver on the left would come get it then pass it off to the wide receiver on the right and then I would sprint hard to the middle for a pass,” Nase said. In practice we learned that this was more of a trick play but it typically worked because I was wide open in the middle. When we did it in the game there was confusion on who was passing the ball to who, so the play was messed up and there was a last minute sloppy throw and the other team intercepted it.”

In the end the seniors kept the streak going with another powderpuff win. Next year the Class of 2020 will have the honor of being the senior class defending the streak.