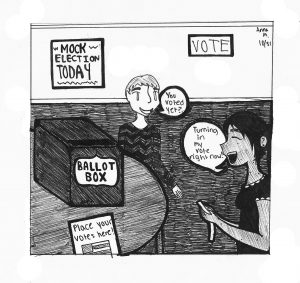 As the presidential election approaches, the high school has decided to conduct their own mock election. Students enrolled in Advanced Placement Government have created campaign posters to inform student voters of the candidates. This mock election imitates the official election taking place on November 8th, 2016. The students in AP Government chose a candidate to impersonate for the mock election, and these students took to PGTV to record their election speeches. However, in the past two weeks, this mock election has caused tension in the school. Unfortunately, students have been expressing their political feelings by tearing down many of the campaign posters placed around the school. If the high school was considered private property, then students participating in tearing down posters, could face penalties up to 1,000 dollars. Although the high school is not private property, it is still not permissible to tamper and destroy the work of others. Although students have different political views, it is vital to respect the work of others. It also important that students keep our learning environment positive. Students should be able to agree to disagree on their choices for political office. If necessary, keep your political views to yourself. Instead of tearing posters down to express political views, use that energy in learning more about the candidate you support. Students can also get involved in political rallies, to learn more about the way elections work. By taking these actions, it will help make our school a more positive place. Students will be able to voice opinions and express political feelings without fearing reactions from their peers.

Education Is Pivotal In A Growing Modern Society