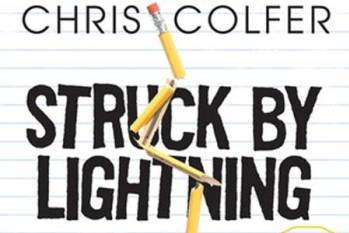 I’m always wary when a celebrity announces a new way of expressing their talent.  I’ve seen enough weak pop debut albums and overemphasized acting appearances from stars switching mediums that I tend to expect mediocrity when a celebrity’s publicist announces their new venue.  Chris Colfer, of Glee fame, surprised me with his young adult novel Struck by Lightning. I bought the book on a whim, mostly because I found it for $3.99 in a bargain bin at Staples. I didn’t expect much from it, but I was pleasantly proven wrong.

The novel is the journal of Carson Phillips, a highly neurotic and superior high school senior counting down the days until he can escape his rural, small-minded town of Clover, “left of the corner of Nothing and Nowhere.” Carson has a very specific plan for his life: he’ll be accepted early decision to Northwestern University, become the youngest freelance journalist to be published in The New York Times, The Los Angeles Times, The Chicago Tribune, and The Boston Globe, before becoming editor of The New Yorker.  Carson’s pretty sure he’ll be getting his acceptance letter any day now—he’s kept his GPA above a 4.0 and singlehandedly  kept his school newspaper The Clover Chronicle as well as the Writer’s Club afloat. He’s set.  As the school year picks up, he tells his annoyingly perky guidance counselor Ms. Sharpton to check with the admissions department to enquire about his status. She reports back with a horrible revelation: Northwestern wants students who stand out, and Carson needs more. She suggests a literary magazine, but Carson knows there’s no way anyone in this school will give him anything to work with voluntarily. In desperation, Carson begins Operation Clovergate with his minion/closest thing to a friend, Malerie: picking strategic targets and recruiting them to write for him with unsavory methods like blackmail. He’s got until December to pull this thing off, and everything he’s ever worked for is on the line.

Struck by Lightning is smart, witty, and immensely entertaining; it made me laugh out loud more than once. Carson isn’t the nicest guy, but he’s still likeable and relatable, especially to another newspaper editor.  Colfer also deals excellently with serious issues like family dysfunction, dementia, and depression without losing Carson’s sarcastic, humorous voice. Clichés abound in the book, but they’re purposeful and somehow make Carson’s observations all the more funny and relevant. The only criticism I can really offer of the novel is the ending, which literally made me ask, “What?” and read the last few pages again.  I suppose it’s fitting, but it’s definitely shocking and very abrupt.