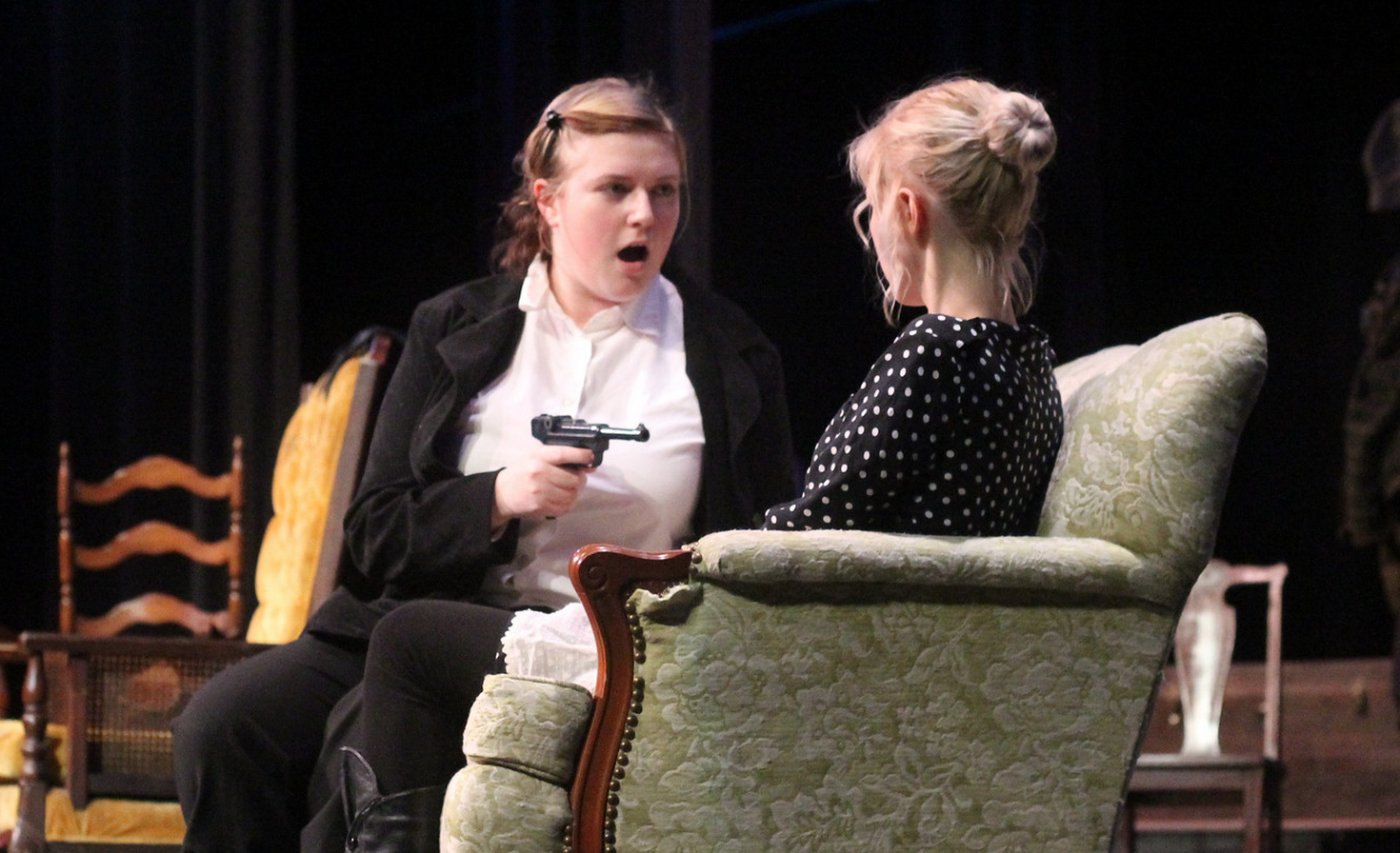 Senior Christina Howe steps out of the right wing of the stage, ready to assume her first lead role as Mollie Ralston. Excitement and nervousness rushes through her mind as she recites her lines one last time. A cathedral radio plays in the background, and a voice announces a murder has taken place only a short distance away. In only a few moments, the audience will be drawn into the constant twists and turns of the PG Players’ winter production, The Mousetrap.

The Mousetrap, written by Agatha Christie, first came to stage in 1952. The characters in the murder mystery include husband and wife Mollie and Giles Ralston, Mrs. Boyle, Christopher Wren, Major Metcalf, Miss Casewell, Mr. Paravinci, and Detective Sergeant Trotter. The guests spend the night at the Great Hall of Monkswell Manor and use clues that point to one of the guests as the murderer. The play was originally performed as a radio program under the title “Three Blind Mice,” and premiered in its current format at London’s Ambassadors Theatre on November 25, 1952.

Darryl Philips, theatre teacher and director of the play, chose the play because he believes the entire play will captivate the audience’s attention.

“Because it is a murder mystery, it is suspenseful from the beginning throughout the experience of the whole play,” Phillips said.

What makes this play different than all the others is that the Players will be acting out a new genre: mystery.

“I picked this play because I wanted to do a classic. It is the longest running play in theatre history,” Phillips said. “And we have never done a murder mystery.”

Apart from the usual stresses involved in the production of a play, like having the proper costumes, memorizing lines, and blocking, Junior Lexi Korkos, who plays the role of Detective Sergeant Trotter, cites that “the most challenging part [of the play] is the accents.”

The Players also have to represent their characters with different personalities than they are used to. Sophomore Kendall Tison, who plays Mrs. Boyle, finds that the most difficult part of the production is the role that she plays.

“I don’t like being rude to people. It shows a side of me I don’t like to show,” Tison said.

In contrast, Howe enjoys portraying the personality of her character.

“She is really innocent and wants the best for everyone and the hotel,” Howe said.

With less than one month until opening night, the entire cast is focusing on the details they need to improve. Howe is working on finessing her characterization of Mollie Ralston.

“It’s hard for me to do the longer scenes right now because I’m focusing more on my lines than my movement. I’m getting better now, but in the beginning I just had to stop and take a million notes on placement. When we run through it again I’m more confident as to where I stand and I know what I’m doing,” Howe said. “It helps that our director is extremely reassuring. He encourages us to make choices in this play that we think are right and to see where it takes us.”

The play is being performed almost in its original format, with some small changes.  The original play involves 8 characters, while the Players’ production involves 9 characters. The role of the “voice on the radio” has been added to the cast list. The role of Trotter, played by Korkos, has been traditionally assumed by a male, but the Players are using a female.

The audience is traditionally asked to keep the twist ending of the play a secret after leaving the theatre.

“The audience is always guessing the entire play. By the end of Act 1, you meet all the characters, and one character will die by end of Act 1. By Act 2 everybody is a suspect and by the end you will find who has done it,” Phillips said.

The Mousetrap will open at Prince George High School on Thursday, December 4 and run through Saturday, December 6.

“I’m really excited for the audience to see something serious. We have really nice dynamics with each other and our back and forth lines set people on edge,” Howe said. “It’s nice to do a play people will be thoroughly perplexed by.”