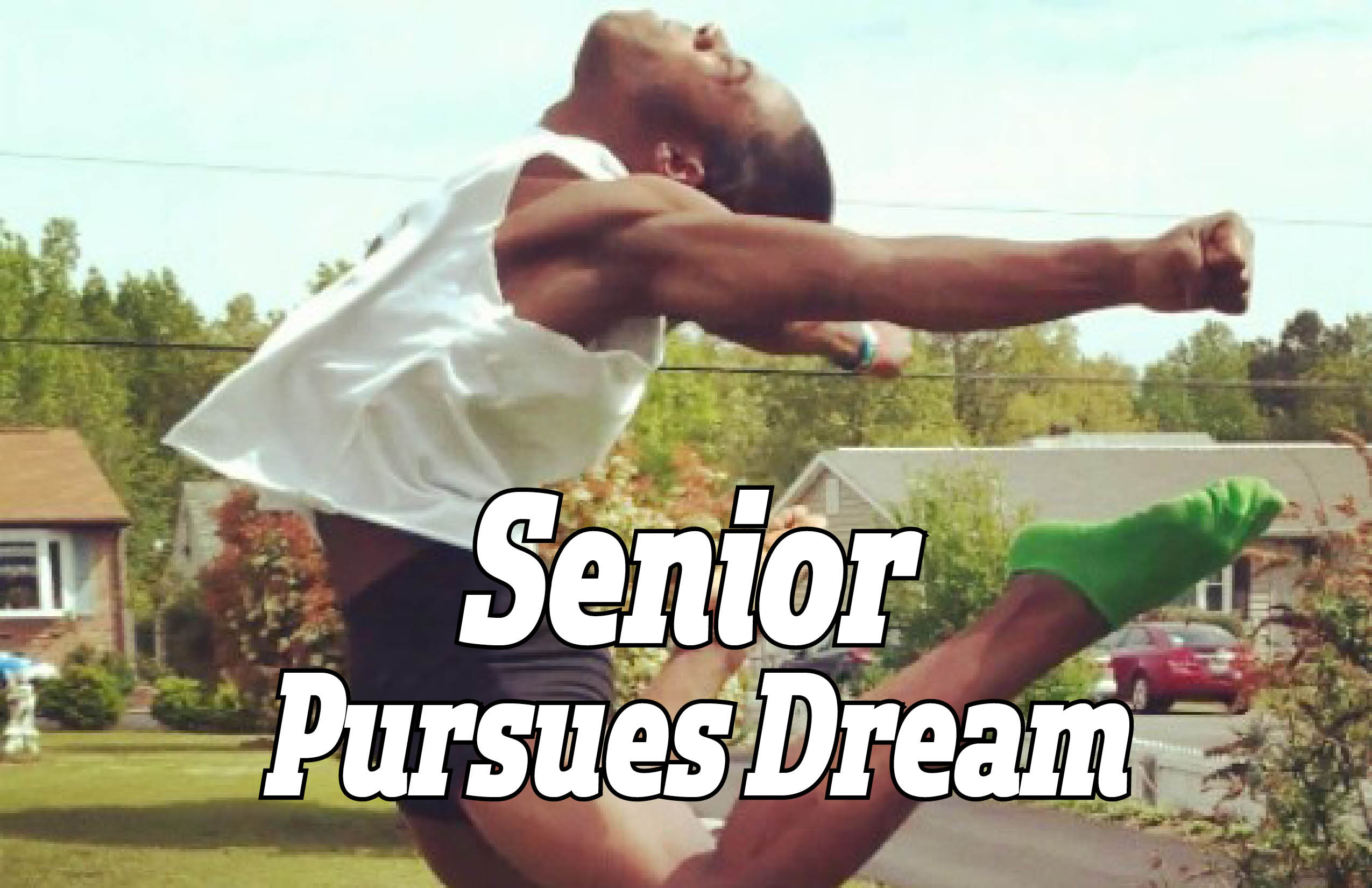 Senior Khalil Sanders pursues his dream by furthering his dance career and education in New York.

Senior Khalil Sanders takes a few deep breaths, attempting to calm himself as he stretches in preparation for the performance ahead. As he starts to dance, all his anxiety melts away, replaced with a happiness and peace that only dance can give him.

Dancing is a common pastime for many students, but only a handful of them plan to make a lifelong career out of it. Sanders is one of those few.

“I’ve been dancing since the age of seven,” Sanders said.

He began to dance after viewing a performance by a friend of the family.

“My mom had a friend who danced, and we went to a show and saw him dancing. That’s where I got my inspiration from,” Sanders said. “I also took gymnastics for three years, which also helped me get into dance.”

Sanders does not limit himself to one category of dance. In fact, he takes five different types.

“I take ballet, jazz, modern, lyrical, and tap at Genia Johnson Dance Company in Colonial Heights, where I’ve been dancing for a year or so,” Sanders said. “My favorite is lyrical. It lets me show more feeling.”

Dancing is something that Sanders has made a long-standing commitment to.

“I dance every day,” Sanders said. “I spend about two hours a day dancing, but I spend at least four hours dancing on Fridays, Saturdays, and Sundays.”

Sanders’ also plans to center his future completely around dancing.

“I am attending MYU in the fall for dance,” Sanders said, “It’s going to be my main focus.”

Although he is looking forward to attending MYU, he does have some anxiety about the transition.

“I am a little nervous because the dance there is so intense. I actually have to leave early because we have to train beforehand. Also, I’m used to taking five classes a week, but when I go to MYU, I’ll be taking twelve classes a week,” Sanders said. “It’ll definitely take some getting used to.”

One thing that Sanders is not so nervous about is performing in front of large groups of people.

Sanders sees dancing not only as a pastime, but also as a way to get rid of stress.

“It’s a great way to express myself,” Sanders said, “Getting new moves down, preparing, stretching, doing my jumps, leaps, and turns…it just feels great. If I’m down on school, or having any other problems, I dance. It’s like a pain reliever.”

His goal is to dance as long as he can, including after his college years.

“I plan on being professional for ten to fifteen years, and afterwards I’d like to have my own dancing studio. That’s my long term goal. I’ll dance until I get older and can’t dance anymore, and then I’ll teach,” Sanders said.

As a student, Sanders has had no shortage of dancing opportunities; one of them being the recent production of the school play, House of Dracula.

Another opportunity came from Kings Dominion. “I’ll be performing at Kings Dominion from June 18th through the 21st,” Sanders said. ”I’m actually getting paid to do it.”

To Sanders, it does not matter where he goes; as long as he is dancing, he’s content.