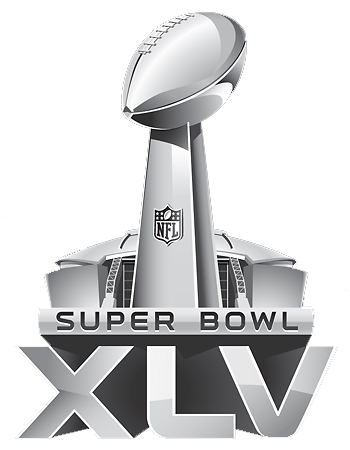 Super Bowl XLV is an unlikely matchup. I am not sure how many people would have picked the Steelers, who started the season with their star quarterback Ben Roethlisburger suspended, to play the Packers, who were ousted early in the playoffs last sesason. But the Steelers always seem to find a way to make it deep in the playoffs. And the Packers have ridden a phenominal defense and outstanding play by quarterback Aaron Rodgers to play for the title. I believe that this will be a great game.

These two teams have two of the best defenses, but I think that the offenses might steal the show for this game. The Packers have a very experienced receiver corps of Greg Jennings and Donald Driver to haul in passes from Rodgers. Green Bay also has rookie running back James Starks, who has been a force thus far in the playoffs. Pittsburgh receiving will be anchored by Hines Ward, and the rushing attack should come primarily from Rashard Mendenhall.

This game will be back and forth, but that the Steelers will pull out the win. I think that they are just too experienced. When the going gets tough, Big Ben and Hines Ward always seem to be able to engineer a win. I say that it will be Pittsburgh 34, Green Bay 24.

Just one week from this Sunday night millions of Americans will gather around their televisons to see the most watched event in America and that is the Super Bowl. This years game features the Pittsburgh Steelers and the Green Bay Packers. It should be a very intresting game to watch but I think in the end the Packers will pull out a win and claim their fourth Superbowl victory.

Now while some may think he is too young, I believe that Rodgers is ready to step into the role and be the next great NFL superstar. Now on the defensive side of the ball the Packers are led by what i believe to be the best linebacker core in the NFL. Led by Clay Matthews on the outside, the great linebackers for the Packers should force the Steelers to throw the ball and that is where the great corner play of Charles Woodson comes in. With his experience and leadership the secondary for the Packers will not make it easy for the Steelers to throw the ball. So while it will be a hard fought game.

I am going to make my prediction and say that the Green Bay Packers will win this game and claim a fourth championship. A fourth trophy that bears the name of their legendary coach. Final Score: Green Bay: 31 Pittsburgh: 21

If you think the Super Bowl will end differently post a comment here and let us know what you think.

This I Believe: There Is Someone Who Will Look Out For...